A day after India welcomed a New Year, it also erupted into a furore as two women, both under 50 years of age, entered the sacred temple Sabarimala. Though still hungover from an imported booze bender tradition introduced by Westerners men’s cries damning the women for breaking tradition could be heard from every corner of the country.

On the same day, Indians also saw another woman, Malayali journalist and videographer Shajila Ali Fathima, determined to film the riots that spilled on the streets on January 2. Her photo has since gone viral. It’s a moving image of a person, committed to their job, filming the street rioting even as the mobs hit out at her with heckles and insults so hurtful that tears streamed down her face.

Where was her protection? What did she do wrong even? Are we becoming a country that celebrates the new on one day and then turns into a stung beast over an old tradition the next?

Fathima’s bravery as much as her apparent vulnerability galvanised a nation of women. All of the Prime Minister’s insistence that Sabarimala is an issue of tradition fell flat when juxtaposed with rioting men, threatening and abusing women who want to quietly pray.

Is Faith the Exclusive Domain of Men?

From the get-go, Sabarimala has been a gendered issue, the kind that often hides behind the veil of oppressive traditions. The two women, Fathima’s image, the seething anger of the mostly male protestors: this fight to pray is a fight for equal rights, a concept that’s become all but depressed in an increasingly toxic air of mardaniya that women are forced to breathe. 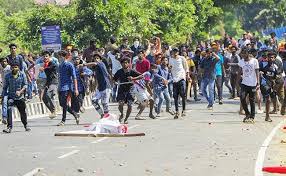 It began with The Supreme Court order that allowed women between the ages of 13 to 50 to enter the Sabarimala Temple. A decision met with protests and even assaults on women who tried to implement the letter of the law. But as the Sabarimala issue played out, the violent turn it took; there can be little doubt left in anyone’s mind that when it comes to curbing freedom of women and equal rights, even top courts do not matter.

The BJP’s and PM Modi’s stand on Sabarimala didn’t come as a surprise to anyone. It is of course hypocritical of a party that self-righteously stands up for the rights of Muslim women, to let the skeletons in Hinduism pass off as tradition. But then again, when have politicians stood up for women unless the stance would bring in votes like K’Ching-K’Ching. The ruling party’s stand is a slap in the face of inclusive feminism. It is one sentence shy of divide and conquer, only this time Hindu women and Muslim women.

In a particularly heated election season, it is convenient for the BJP to ignore that nearly 5 million women formed a human wall in Kerala, demanding that they are allowed to enter the Sabarimala shrine. 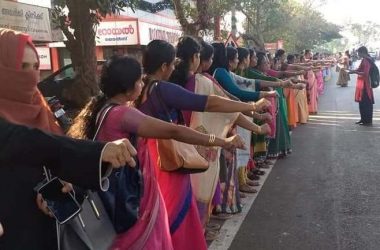 Kerela: women make a human wall to protest sexism in the name of faith

These thick globules of blindness that they are hiding behind would be amusing if they were not so noxious. Feminism for them is not a cause, but a convenient card played when it accommodates their agenda to empower their political party.

The BJP isn’t the inventors of this nauseating form of politics. The Indian National Congress, our fake-woke Opposition party leaders, dissolved in fear when confronted with the issue. Rahul Gandhi’s newfound spine and vocal cords died out when asked how Congress would handle Sabarimala. Instead of taking a stance, he side-stepped not just the issue but also his party. “In my personal opinion, both men and women are equal and have right to go wherever they want, said Rahul in an interview to a national media. Women in Kerala are supporting the stand of Congress party. There is difference of opinion between me and the party in this subject. But the Congress party accepts and understands the feelings of Keralites. So I’m accepting the views of the party,” was his neither-here-nor-there answer.

For a party that calls itself liberal, you would expect them to be at the forefront of opposing a ‘purification’ ritual that takes place because two women of menstruating age created history by entering Sabarimala. You would think that since the Congress claims to form a ‘secular’ opposition to the BJP, they would condemn this tradition that is calling untouchability back. But even the supposedly liberal Congress leaders like Shashi Tharoor have called the entry of women, “an unnecessary and provocative act.” He went on to say, “We believe in women empowerment, but this is a matter of faith.”

To them I ask — what about the women’s faith? How strongly must they feel to continue to try and pray with a mob frothing at the mouth on the temple’s doorstep waiting to harass, insult, assault them? How much faith must it take to pray when the steps towards God’s doors must be walked with virulence spat out at them through the way?

While the right wing’s stand is condemnable, it is even more distressing to watch the Congress collapse and surrender to populism. This is a party that might want to take on the right- wing agenda but just does not have the spine too. Primarily when the matter being spoken of is Hindu traditions.

Do All Traditions Deserve Blind Fellowships?

At this point, I think we should all remind ourselves that in ancient India not permitting people from lower castes into temples was also a tradition. But I think a majority of us today have evolved into understanding that when a tradition (however old it may be) discriminates against a group of people, it must be forgotten and put to rest. The stakeholders and protectors of tradition in the Sabarimala case argue that the taboo is not discriminatory but because of the celibacy of Lord Ayappa. What they forget is that this argument was addressed and dismissed by SC Justice Chandrachud. “The responsibility of a man’s celibacy cannot be put upon women,” he said.

No. The issue still rambles on violently.

It is reprehensible that in this day and age, women are being asked to hold shame in their biology; that a temple has to be ‘purified’ after two women in their early forties offer prayers. Even more bloodcurdling is the sheer normalcy with the turn of events is being treated. Violence may have been condemned by all, but the audacity with which this purification was defended is genuinely cringe-worthy to watch.

It would seem people have forgotten that devotion is personal; faith is an idea that can be interpreted in multiple ways? And how is it that historically we have always managed to shamelessly engage in deadly violence and aggression in the name of faith. You could argue that India is diverse and hence conflicts are bound to take place, or you could honestly admit that there is something inherently wrong with the way we practice democracy and secularism.

Primarily what the Sabarimala issue tells us is simple; women are still seen as political pawns. Issues will be picked selectively and selfishly, without a conscience at play. And while the political bickering doesn’t seem to stop, it would be nice if someone reminded both the national parties that their claims go entirely against the ruling of the Supreme Court.

Unfortunately, our political class, can somehow still manage to get away with not caring about women’s rights and equality.

Mumbai born, Anjali Menon studies visual communication and creative writing in Bangalore. She's interested in women's issues, books, and is a regular contributor to The Ladies Compartment. You can find her words on TLC's website and stalk her (just kidding) on Instagram @a_catinthesink