Born in Calcutta, Sharmila Sen’s memoir Not Quite, Not White chronicles her metamorphosis from a fresh-off-the-boat girl in White America to a Non-White American citizen. Amid the spectrum of brown visages she grew up seeing, the young Sen never used race to identify herself. This changed when, in 1982, her family migrated to the United States.

A Novel in four parts

Told in four parts, NQNW begins with Sen’s memories of 1970s Calcutta, where she lived until the age of 12. The author paints a graphic and depressing picture of India’s abject poverty and also the country’s racism and casteism.

Sen grew up in Calcutta “with an entirely different set of extended labels for putting people in boxes.” She is taught to be “vigilant” about trespasses,  mixed marriages or Muslims posing as Hindus and the like. Before migrating to the US, Sen is aware of her privilege — being a light-skinned Indian, her ability to speak English, and so on.

Within the pages of her memoir nestles an incident when the young girl observed a servant boy of her age. He’s sweeping the floor of her room while she sits on her bed. Her idle observation of an angry boy cleaning her mess is a penetrating commentary on the circumstances that helped her.

Fascinated, Sen can’t take her eyes off a black man she sees at the American Consulate. He’s the first person of African-descent she ever saw. This speaks volumes about the coddled childhood that she led. So when Sen tries to distinguish her idea of race from the Indian practice of casteism, it falls flat: “We all had distinguishing labels. But race we did not have.” It’s hard to swallow that she could not or does not see a direct line between caste and race, given the practice of and history behind both social evils.

In 1982, in poetic synchrony the table flips on her in 1982. When Sen’s family migrates to Cambridge, Massachusetts, suddenly, she’s a minority. Now, race becomes a pivotal point. Going from Calcutta, where she halfheartedly watched American movies and ate American food, she finds herself in the heartland. Sen and her family are desperate to conform. Her description of her family’s attempts to learn “whiteness” – by learning to eat “American” (mostly Campbell soups and Bisquick mixes) and changing their accents — is an intimate account of how immigrants carve out a space for themselves in a white man’s world.

Sen herself tries to develop a “new American accent” by watching popular Americana-triple-dipped television shows like Happy Days. Growing up, she finds herself navigating and somewhat circumventing the hazards of race politics. She writes of silently accepting the “badge of honorary whiteness”. Simultaneously, she describes carefully packaging her India heritage for white American consumption. She didn’t want to be seen as “other”. Sen says she was being “a brown woman mimicking a white man pretending to be a brown man.” 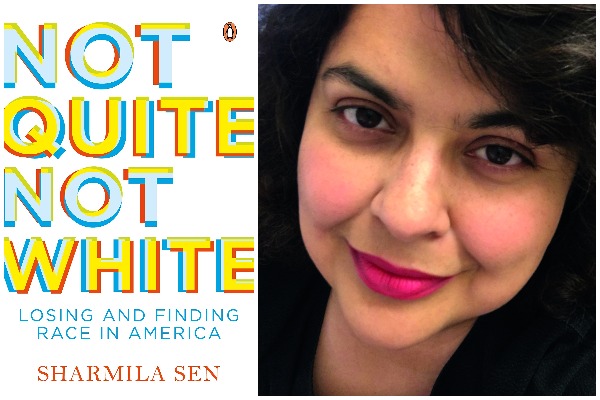 Sen’s race — her brown face — are often thrown at Sen. In middle school, when her class goes to see the film Gandhi, the teenager’s classmates talk in exaggerated Indian accents in front of her. Sen notices this childish joke. The irony of a Caucasian actor cast as one of the most recognisably brown men in the world seems lost on Sen even in adulthood. In sharp contrast, she writes about being hired as a university professor and having a colleague question whether she was a diversity hire. The implication that she took the job away from a more deserving candidate isn’t lost on the author.

The memoir and “part manifesto” is a heartfelt account of what it means to be an outsider. With wit and through poignant moments, Sen’s book calls rethinking white as equalling American-ness. NQNW tells the tale of non-white immigrants attempting to be smiling eager-to-please Appu. Not quite part of the main cast, but bringing a new spectrum to the narrative nonetheless.

The culmination and the title of the book comes when Sen is forced into a whiteface performance. What results is the uncorking of years worth rage. The memoir becomes about unmasking the whiteness of America. Rendering it invisible by showing the bitterness behind the Ambien soothed smiles. It challenges white culture’s claim as the USA’s dominant culture. In that sense, Sen’s memoir is essential reading. NQNW is a story about trying to hold on to your identity even us the world is thrusting one on you.

Note: A version of this review was published first in Hindustan Times on January 4, 2019.

Quit Mourning Karl Lagerfeld: A Poster-Boy For Not Separating Art From Artist