How much does the Hindu majority of India think about its privilege? How long before prejudices we think of as beneath us bubble up to the surface? Who pays the price for our advantages? Tabish Khair’s new book Night of Happiness hurls these questions at its reader.

A mere 154 pages, Khair’s book could be considered a novella that packs a punch — to the stomach of anybody who may not have considered the questions it poses. A story about Hindu privilege as much as it is about the ‘invisibilization’ of Muslims in India, this is a taut work, and the author appears to have weighed each word for its functionality.

Told in the first person through the voice of Anil Mehrotra, a Hindu businessman, the reader follows his investigation of a Muslim employee, Ahmed. Ahmed has no last name: the first subversive action that blanks out his identity. The protagonist considers himself a progressive soul. He wines and dines with the city’s elite artists and writers, some of whom are Muslim; he thinks the gaurakshaks loonies, he doesn’t share the ideology of Hindu extremists and completely distances himself from the Gujarat riots of 2002. Yet, within the first eight pages of the novel, his discomfort with Islam and its followers becomes obvious.

Reluctantly granting Ahmed an interview because his is the only Muslim application in a stack of Hindus CVs, Mehrotra is ready to reject him even before the meeting is completed. “I did not want to feel prejudiced by not giving him a chance, but I had never known a Muslim intimately, and, well, you know how it is in such matters. You work with what you know,” he says. 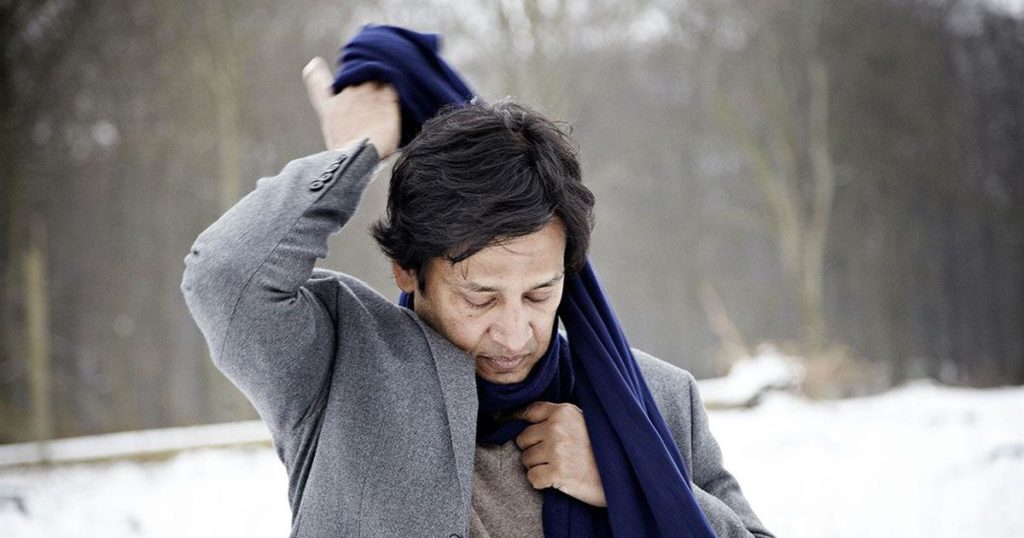 Mehrotra eventually hires Ahmed because his acumen with different languages is good for client-servicing in an import-export business. So begins their seven-year friendship-of-sorts. Ahmed is an exemplary employee — on time, ready to help everyone, quiet but polite. He asks only for one day off a year, the night of Shab-e-baraat. By taking halwa to his mother’s grave on that night, Ahmed and his wife honour her. Mehrotra doesn’t know what the holiday is about — the only other Muslim he has ever really known was with him at boarding school and could only speak English. Both religion and class separate Mehrotra and Ahmed.

When Ahmed is asked to stay back to work on the holiday of Shab-e-baraat, being a devoted workhorse, he agrees.

Eventually, Mehrotra drives him home and Ahmed invites his boss into his house. There, Mehrotra sees a strange side to his right-hand man. Served an invisible halwa made by Ahmed’s wife, who also never materialises, Mehrotra decides to have his employee investigated. The details that emerge, unfolded steadily through the book, lead him to fire Ahmed for fear of the Muslim “going crazy at work.”

Ahmed does not exhibit any signs of being an extremist or even dangerous. He is the first one to decry the idea that the Quran proclaims that women must wear the niqab. Ahmed is married to a non-Muslim — another detail that bothers Mehrotra even though Ahmed never asked his wife to convert. If anything, he is too perfect a character; almost a flat one.

Mehrotra’s detectives find that Ahmed’s wife did convert, though not at his behest. They inform the businessman about a quiet, studious young man who fell in love with a barmaid in Bodh Gaya. While he imagines Ahmed in a madrassa, the detectives find the man belonged to a pacifist, non-political sect of Islam that sees themselves as modern and not as fundamentalists. “Their stress is on education and living an ethical life defined by Islamic precepts.”

This news does not allay the Hindu’s man fears that Ahmed might be crazy and a danger to other employees. Neither does the fact that Ahmed has not, in seven years of employment, exhibited any signs of violent behaviour.

The investigation sheds light on Ahmed’s courtship of his wife, his willingness to work outside his community to support his mother, and how he came to learn the many languages at which he is adept. It also brings out the fact that the Muslim community shunned him for all these acts. Mehrotra remains unconvinced. The more he learns, the further into Ahmed’s life he wishes to dig.

Hindu Point of View Tells More Through Its Omissions Than Admissions

To have the voices of Hindu men tell a Muslim’s tale is a carefully thought-out decision on the author’s part. Ahmed’s story is told through his employer’s omissions, lack of knowledge about Islamic culture, and presumptions.

Eventually, though the investigation finds nothing violent about Ahmed, it unearths a violent incident in 2002 in Surat. A group of Hindus slaughtered Ahmed’s wife, even as her neighbours cried that she was not a Muslim. Though nothing suggests that Ahmed has held on to feelings of revenge — he has worked for several Hindu-owned companies before Mehrotra’s. The business fires him anyway. But not before confronting him with what he has found.

Interestingly, even before he learns of the details of Ahmed’s life, Mehrotra displays signs of suppressed guilt towards Muslims, an underlying fear even. While asking Ahmed to stay back during the holiday of Shab-e-baraat, he describes his employee’s short silence while considering the matter as “a loaded gun” pointed towards him. Later, he expresses irritation at the way Ahmed looks at him without anger — though he tells himself there is no reason to expect rage.

A reader wonders if Ahmed’s firing had anything really to do with the incident of the invisible halwa. A victim of Hindu violence, the only danger he seems to pose is dredging up Mehrotra’s suppressed guilt. This is often the case with many members of majority communities, whether they are Hindu, Israeli or white American. These individuals see other members of the majority community perpetrate violence against the minority and believe that, because they did not take up arms or join the mob, they did not facilitate the destruction. The opposite is true: not speaking up against oppressors makes you part of the oppression.

When a year later, a bowl of halwa finds its way to Mehrotra’s office, he delights in its taste and smell. He is the only one who sees it though, much like Ahmed was the only person to see his dead wife.

Night of Happiness is published by Pan MacMillan, and is long listed for the Atta Galatta Fiction Prize 2018. It’s available to buy on Amazon.

A version of this review appeared in Hindustan Times on September 16, 2018

How To Handle Being Called Out for Sexual Harassment, A Fake-Woke Man's Guide