Amitabha Bagchi’s latest novel is a thoroughly Indian story. The two threads that run through this tale include the letters from a narcissistic author to his loved ones that details life in India in the 1970s and 80s, and the lives of the members of two north Indian families, of differing class and caste backgrounds, intertwined since post-1857. Half The Night Is Gone, then, may be seen as a review of our past, or as a sophisticated analysis of our society’s weaknesses, the fallout of which is this moment in our history. 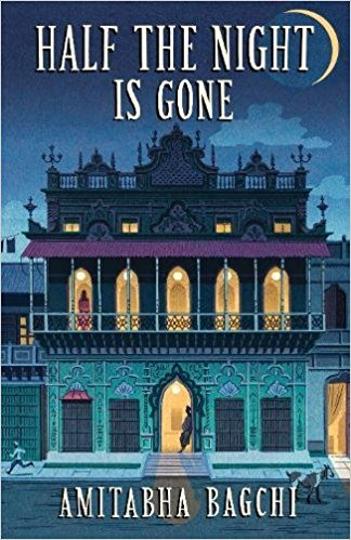 The book starts innocently enough by introducing Mange Ram, a farmer’s son, who gets lucky when he is picked as a wrestling champion for the ruling Mughal family. Thick in the head as he is in body, Ram soon finds himself pitted against a businessman — who is his then-patron’s creditor — and not having the sense to throw the fight, is unceremoniously traded to serve Motichand. The two families — Mange Ram’s and Motichand’s — are then caught in a cycle of co-dependency common in feudal times when the relationship between masters and servants encompassed generations.

Readers follow Mange Ram’s adventures in Delhi: first, his struggles to fit in as a new, somewhat arrogant, cog in the machine that is Motichand’s well-run household; then, as his survival instinct kicks in, a shrewd servant who works his way up through the help-hierarchy to the point of obtaining women for his seth.

In this, his fourth novel, Bagchi plunges his readers into a world of numerous details and characters all of which are so well defined that they’re memorable even if their presence is fleeting. The author plays with prose and structure with the ease of a master puppeteer, controlling the pace with which he chooses for the reader to get to know each person in his created world. He stops at painting a historically accurate picture of Old Delhi but spends ample time in the minds of his characters. So it is that a novel spanning over half a century of Indian history is told through the eyes of nearly a 100 characters. The reader shares an intimate moment with each whether it is Mange Ram, who degenerates into an arthritic-yet-handsy old man or his youngest daughter-in-law Omvati, who dreams of a life better than that of a family servant for her son. Similarly, in Motichand’s family, we get to know his two sons — Dinanath, the prodigal babuji willing to kiss anyone’s ring to further his business interests, and Diwanchand, a sensitive neglected boy who leaves his inheritance behind to become a teller of tales, in particular, the Tulsidas’ Ramcharitmanas. The readers are ushered into Bagchi’s world like a spirit watching the characters lay down foundations that’ll eventually become our present.

Bagchi’s characters reveal themselves so naturally that the reader does not realise at which moment she falls in love with Omvati, or Dinanath, or Kamala (a widow who falls in love with Diwanchand despite herself) or the writer Vishwanathan and his anger. Those feelings sneak up towards the book’s end in the way one may unwittingly fall in love with a friend and not realise it till their absence is sharply felt.

The novel’s interlaced threads are soaked in different, but relevant emotions. The pre-Independence story is calm like a boat floating on a tranquil lake. As much as it highlights painful facets of Indian society, including the treatment of widows, through characters like Lala Motichand, Mange’s Ram’s son Prasadi, Dinanath and his wife Suvaranalata, Motilal’s mistress Lajvati and his illegitimate son Makhan Lal, it also highlights crucial Indian traits that are almost forgotten: our capacity for tolerance and our reverence for loyalty. This thread also shows us the similarities and desires that bind us. Motichand’s family and Mange Lal’s are different sides of the same social coin. As their stories progress, each on its own and also propelled by the other, amid the glaring differences are striking similarities. They are worried for their families, proud of their past, with each stunting their children through an inability to develop sustained emotional bonds.

Through Vishwanathan’s letters, dated 2008, the reader discovers India during the 1960s and 1970s. Guided by the writer through post-independence India’s anger and frustration, idealism shattered like cheap glass, Bagchi reminds us of the Indian capacity to revolt; our unrelenting need to push further, which in many ways is tied to our sense of tolerance — for peace is as vital for survival as freedom.

Bagchi’s prose is reminiscent of 1990s classics like Cuckold and A Suitable Boy. Each sentence is lush and dense with detail like the ber trees that once thrived in Old Delhi. The author presents the harsh realities of our caste system, patriarchal social structure, and ingrained feudalism. The author’s gaze spares no one: not the English who ruled during Motichand’s story; not the Indians who worked with them to enhance their importance and family wealth; not the leaders who ruled over post-Independence who “were more English than they were Indian”; not the angry young writers who burst into independent India believing words had the power to change the course of a country.

And yet, in making his readers deeply invested in both the stories with their flawed characters, who engage in random acts of kindness while also rarely experiencing self-reproach at their actions, Bagchi challenges the reader to look at people as more than the sum of their good and bad parts. He allows room for fondness to creep in for the Motichand siblings, who never experience the pure joy of brotherhood, or for the bitter and egocentric Vishwanathan, who is still using words to try and correct past mistakes. In allowing for these cracks in the otherwise airtight snow globe he’s created, the author invites his readers to remember a trait that is not country-centric, but decidedly human: our ability to forgive, move on, and our capacity for acceptance.

Half The Night Is Gone is published by Juggernaut Books, and can be bought on Amazon.in. It is priced at Rs 492 for a hardcover copy.

Notes: This review first appeared in Hindustan Times. The feature image of two Indian wrestlers is via Wikimedia Commons

Handmaid’s Tale - is there place for hope in dystopia?

Drawing Inspiration From Traditional, a photo-essay